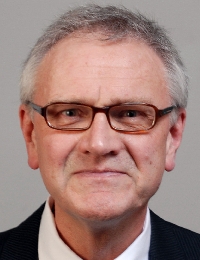 Mr. Nico Oud did his basic nursing training for mental health nursing (RMN) from 1968-1971 at the psychiatric hospital of St. Willibrord at Heiloo and his basic nursing training for general nursing (RGN) from 1971-1974 at the general hospital of St. Lievensberg at Bergen op Zoom. From 1974-1976 he studied as a full time student at the KHSV at Nijmegen, where he graduated with a diploma in nursing administration (N.Adm.)(post-basic training for nursing management / organization = 2 year at master level education). He worked as a teacher from 1976-1977 and became a charge nurse of a psychiatric admission ward at the Valerius Kliniek at Amsterdam from 1977-1978. Next he studied and worked from 1978-1979 as a supervised nongraduating student / psychiatric nurse at the Edinburgh University and Royal Edinburgh Hospital, Scotland (UK). From 1979-1986 he worked as a nursing director of a psychiatric hospital (Rosenburg) at The Hague and later of an institute for mentally handicapped (intellectual disabilities) (Sterrenberg) at Zeist. At the latter he was also deputy general director.

After a sabbatical year in 1986-1987 he started a part-time study at the university of Maastricht for a Master Degree in Nursing Sciences (official Dutch title Doctorandus – drs), where he graduated in November 1991. During his study he worked as a part-time night duty nurse in several hospitals and nursing homes in Amsterdam and as a part-time teacher / consultant at the Hogeschool van Amsterdam (Post Basic Nursing Education).

From 1991 till 2000 he worked part-time as a night duty nurse at the psychiatric clinic of the Amsterdam Medical Centre (AMC) at Amsterdam, and from 1991-1996 also as an educator / trainer / consultant at a consultancy / training institute for aggression management and since 1997 he is working as a nurse entrepreneur within a partnership (‘Connecting’) and within his own company (‘Oud Consultancy’).

During his career he has always been very active within the Dutch nursing society and the national nursing association NNA NU’91 (board membership). He has hold many representative offices (for example vice chairman of the standing committee on Nursing of the National Advisory Council for Public Health / National representative at the Workgroup of European Nurse-Researchers) and for the current positions click here.

Since 1989 Mr. Oud has been researching, writing and lecturing about the management of aggression and since 1992 also about the development and use (of classifications) of nursing diagnoses, interventions and outcomes. He is also responsible for the translation of the NANDA taxonomy till 2008 and the ICNP in the Netherlands and was for a few years associate editor of the International Journal of Nursing Terminologies and Classifications. In 1998 he was awarded by the NANDA with the ‘Unique Contribution Award’ for outstanding contribution to the advancement of nursing diagnosis. Also the organiser for the ACENDIO conferences and editor for the proceedings of the ACENDIO events in 2001, 2002, 2003, 2005 and 2007 and editor for the Handbook of Nursing Diagnoses, Interventions and Outcomes (1995 – 2004)(publisher Bohn Stafleu Van Loghum).

From 2000 till 2016 involved at the College for Mental Health Nursing Specialist (www.ggzvs.nl) in the Master Program as the main teacher for mental health & nursing diagnostics and classifications.

Since 1991, researcher, developer and trainer in the management of aggression in the health sector in the Netherlands, and since 1997 together with Hans Fleury CONNECTING (www.connecting-online.nl) with their own company. And since 2004 CONNECTING started also with the train the trainer program for health and safety officer (social security) / trainer in the management of aggression. A course of about 28 direct contact study days, and in total about 450 study hours (Dutch copy of the program is attached) (about 80 trainers have been trained). This course was a direct result of the developed courses in Switzerland, where from 2002 to 2006 at the initiative of the Swiss League for Nursing the train the trainer course "Trainer for Aggression Management" was developed, in the beginning as a part of a pilot project and study by Ian Needham, which courses are now accepted as a regular professional program in Switzerland and independently carried by the Swiss Nurses Educational School in Zurich. (in total about 80 trainers have been trained by CONNECTING and since then again another 40) In the years 2003/2004 and 2008/2009 training courses "Trainer for Aggression Management" for the Vienna Hospital Association (total of 40 trainers), and this time also with the emphasis on health and safety security and trainer in the management of aggression. In 2002/2003 and 2008/2009, the same course were carried out in Germany in collaboration with the Hospital Hanau GmbH (total 20 trainers). Those training courses are scheduled in Germany and Austria till 2021. Most of them in cooperation with PflegeNetz Austria.

From the start on he is a co-founder and member of the European Network for Training in the Management of Aggression. ENTMA is a non-profit association which aims to unite and support those involved in the design, delivery, commissioning and evaluation of training across Europe. ENTMA evolved from an informal European collaboration between trainers in the management of aggression which existed since 1998 and adopted the name ENTMA in 2004.

As researcher he is involved in the European Violence in Psychiatry Research Group, and is developing an management tool called POPAS (Perception of Prevalence of Aggression Scale).

Oud Consultancy did also organise the German speaking congress “Dreiländerkongress Pflege in der Psychiatrie” in Vienna – Austria (2006 – 2009 - 2012). For further information on those events, please have a look at www.oudconsultancy.nl

From some of those conferences it is also possible to download the proceedings pdf files here.